Be on the lookout for Crispy, Johnny the Crow, Papa VooDoo and Chopper when you visit The Heart of Darkness... you never know where they may be lurking! 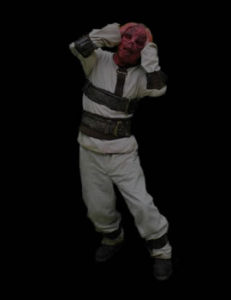 Chris “Crispy” Shlonksky was the best the crime world had….the best at making people “Crispy Dead” as his pals always said.  A perfectionist of his fire starting art, Chris had been responsible for several high profile criminals cremations.  That was till the voices of his victims turned his own arson job back on him.

Surrounded by living flames Chris faced his punishment.  As the flames licked the flesh off his body the voices burned residence into his already twisted mind. “You shall live, but your torment will be eternal”.

Found with but a breath of life left in him, Chris was brought back to consciousness by the doctors of the local asylum, but he was severely burned.  Crispy lived in a tortured state of constant pain for years.  Burning flesh and screams of his dead victims quickly eroded his sanity, which left him nothing of the man he once was.  "Crispy" was born, locked in the deepest part of the Asylum.  While he was there, the community was safe from this insane arsonist, until the day of his escape.

It’s not known if Crispy has taken back to his horrible ways or if he is simply somewhere screaming in pain, but it is assumed that any creature that can kill eight large orderlies and “burn” his way out of a maximum security asylum is capable of many insanities.  Avoid him at all costs! 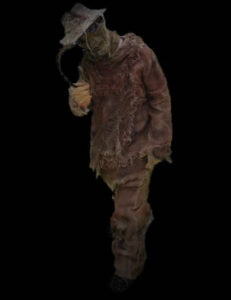 Johnny was just seeing the first weeks of his 17th birthday when his third dad left.  He was a good son who only knew two things: how to work the small farm which his mother inherited after his true fathers death, and that his mother was not just his only kin, but the only one who truly loved him.

Early one day in October, dad number four rolled up the long dusty drive, scaring the crows out of the nearby corn field. Looking over the man, Johnny realized that something was off about him. Was it the stink of whisky, or how he pushed his way past Johnny on his drunken walk up to the old farmhouse?  Johnny wasn’t sure.

You see Johnny always did as mother said, and one of those things was never to mind Momma’s special friends.  So, Johnny did what he was told and went back to his chores.  He went into the cornfield to scare the crows away.

The scarecrows aren’t doing the job and there seemed to be a very large murder of crows that had arrived that day.  So many, in fact, that when they all took flight it almost blotted out the sun.

Hours passed and most of the chores were done by the time dusk's orange glow shed the last rays of daylight.  Johnny was clearing out some of the rogue crops when the scream split the squawks and calls of the crows. A scream that sent shivers throughout this body.   “Mother!”

Fear, anger, and pain welled up in Johnny.  What could cause Mother to yell in such a way? Johnny ran into the house, up the stairs and burst into the room, scythe in hand.  Mother was unconscious, and bleeding from a head wound as the man stood there, laughing.  The man leaped at Johnny, knocking Johnny to the ground.  This man must have out weighed Johnny by at least 150 pounds and was much stronger, which was proven easily as he ripped the scythe out of Johnny’s hand and began slicing though the young boys clothes and into his flesh. In moments the boy was nothing more than a lump on the bedroom floor, spouting blood as he tries in vain to take his last breath.

The eyes of the man burned wild with a look of twisted enjoyment as he hefted up the dying body of Johnny.  “You sure do like scaring off those crows, so how about we make that permanent?”  Johnny was carried to the cornfield and after cutting loose a scarecrow off a post, the man dressed Johnny in the tattered rags that once held the old rotten straw scarecrow together and hung Johnny in its place. “Now you can watch the crows forever, kid!  Time to finish what I started with your precious mother.”  The man left the cornfield, walked into the house, climbed the stairs to the bedroom, and continued his brutalization of Johnny’s Mother.

Three day's time passed and Johnny’s mother could take no more .  As the last dying breath left her body a dark fire erupted in the place of Johnny’s hollowed eye sockets, picked clean by the crows.  The shredded corpse of Johnny leapt off the scarecrow post, and ran towards the house.

The first thing the man noticed was the crows.  They were everywhere, blotting out the sun that normally cascades through the windows of the old farm house.  Turning from the windows to the doorway the bad man shuddered…  the dead body of Johnny stood before him, scythe in hand.  With an unnatural speed, Johnny the Crow launched at the man shredding the flesh off his bones, one powerful slice at a time.  In mere moments the man’s life was at the threshold of death’s door.  A distant, empty voice filled the bedroom of the old farm house:  “Not yet, the crows must eat.”   The windows exploded, filling the room with the crows, who anxiously began their feast.

Several days later friends of the family discovered the beaten, dead corpse of Johnny’s mother, and the bloody skeleton of a large man.  Johnny was never found, but it is believed that Johnny the Crow is somewhere in the cornfield, waiting, watching for trespassers on his farm, extracting his twisted vengeance on any who cross his path.  If you see a dark cloud of crows approaching, be warned 'cause Johnny is coming for you. 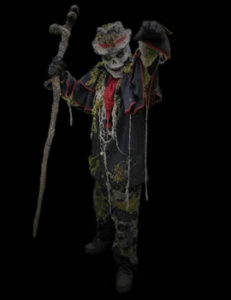 Herschel Wilthacker was born into power. His fathers inheritance gave him and his young wife time to travel the country.  After a trip to New Orleans, he became obsessed with the power of the VooDoo Priests.

He began practicing VooDoo himself and studying the belief of resurrection and the re-animation of dead flesh. He began calling himself “Papa VooDoo” and began dressing the part of a New Orleans' gentleman: black and burgundy caped suits with matching fedoras. He would ask family and business associates to refer to him as “Papa”.

His wife quickly became resentful towards his new passion. Herschel was aware of his wife's disinterest, but “Papa” saw her resistance as disrespect.

It was on October 31st, 1913 when Herschel emerged from his study and his wife met him in the hallway in tears.  She had enough of what she called “his games”.  She did not recognize the man standing in front of her.  His skin had turned bone-white and he reeked of rotted flesh and chemicals as she came towards him.  He raised his hand to stop her from getting too close when an unseen force seemed to come from all around him, pushing her off her feet and sending her down the flight of stairs behind her.  Herschel watched as his bride fell to her death, while “Papa” laughed at the opportunity to awaken one more servant to do his bidding.

Slowly, the towns population began to decrease, falling victim to unseen forces.  As new victims were laid to rest, their graves would be found empty just a few days later.  Those who ventured out at night might see a loved one they thought had past, only to find themselves falling victim to what was a lifeless shell of the ones they knew.

The only activity seen at the Wilthacker estate would be candles in the windows and an occasional grocery delivery.  Even the delivery boy would not see Herschel.  He would find cash on the front step with a note instructing what should be in the next delivery.  The notes were always signed “Papa”.  One day,  the mortuary received an order for a coffin and the instructions stated the coffin would be the most elaborate they had ever made.  “One befitting a Priest of the highest caliber.  One I can be proud of.”

The mortician delivered the coffin just as instructed.  He returned to town telling of what he had seen inside the home.  Dark, quiet servants in tattered suits and dresses.  The servants did not speak, but tended to “Papa’s” every whim.  “Papa” sat in a large chair covered in cobwebs and dust.  He told the mortician to let the townsfolk know that “his work is nearly complete however his army will continue to grow.”

This information enraged the people and they attacked the Wilthacker home.  They found Herschel deep in the cellar of the home where, reports say, they brutally beat him while voices from every corner of the room screamed in agony.  Out of respect for his father’s legacy, he was buried in the elaborate coffin he had made and laid to rest in the family plot in the local cemetery.

Three days after his burial, the grounds keeper reported that his grave had been dug up and his coffin and body removed.  The town he called home is now nothing but an abandoned group of buildings.  People say that Papa still walks the earth searching for those who will do his bidding... Resurrecting the dead to seek out new victims as Papa VooDoo continues to build his Army of Darkness. 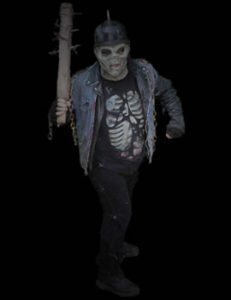 "Chopper" Charley Bartlett was the toughest, meanest biker that ever rode during the hippy days of 1972. He was also extremely hated and feared by many, including his gang, The Dark Riders, who he kept a tight rule over using brute force. The atrocities Charley and the Dark Riders committed to the innocents in their path became a bloody trail of nightmares that seemed had no means of stopping. Charley had all he wanted, Helter Skelter and a gang to do his sinister bidding. That is, till the day the Dark Riders turned on their maker.

During a stop late one night at an old cemetery, Charley was enforcing his twisted justice on one of the Dark Riders, as he would do to rule, and through a twist of fate became the one being beat down.

As Charley began a brutal ‘lesson’ with two of his followers that would surly have ended in their deaths, his foot slipped, landing him in the bottom of an empty grave.  Seeing their chance to be rid of Charley they surrounded the grave, they pummeled him with foot and shovels, trying to keep him from crawling out of the pit.  Three of the Dark Riders were pulled down into the hole and their bodies crushed by Choppers raw force.  Finally, beat to unconsciousness, Chopper Charley was buried alive in what would be his death cell.

Utterly demoralized as reality set into the remaining Dark Riders of the horrors they performed at the will of Chopper Charley, they disbanded never to commit a dire act again.

Almost forty years later, during a year where it seemed like the rain would never stop and as flash floods ravaged the ancient cemetery of Charley’s entombment, the ground opened unleashing the undead Chopper to claw his way out of his earthen prison. You see, his hatred of all living, especially his wayward children, the Dark Riders, grew so strong, that even death’s door could not be held shut against his anger.

It is now know that all of the original members of the Dark Riders were brutally killed by a force so powerful there was nothing left but crushed body parts. And now a grave stands open where once a terrible creature of Destruction was imprisoned. Chopper is out there and looking for new members for his Dark Rider gang. Wanna join?